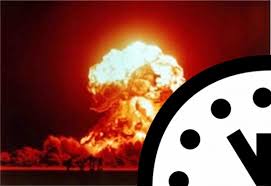 (CNN)The world is closer to doomsday.

That’s the message from the Bulletin of Atomic Scientists, which moved its iconic Doomsday Clock up two minutes on Thursday. The clock now stands at three minutes to midnight, the “latest” it’s been since 1984, when the Cold War between the U.S. and Soviet Union was a major issue.

Today, unchecked climate change and a nuclear arms race resulting from modernization of huge arsenals pose extraordinary and undeniable threats to the continued existence of humanity. And world leaders have failed to act with the speed or on the scale required to protect citizens from potential catastrophe,” said Kennette Benedict, executive director of the Bulletin of the Atomic Scientists, in a news release. “These failures of leadership endanger every person on Earth.”

The Bulletin’s Science and Security Board looks at global issues on a regular basis and decides whether to move the minute hand of the clock, with particular stress on the status of nuclear arms and reaction to climate issues.

In recent years, the clock has moved the wrong direction for humanity. After standing at 17 minutes to midnight in 1991 — the furthest it’s ever been from the end of the world — it’s gotten closer each time it’s been changed since, with the exception of 2010, when it was pushed back by one minute to 11:54 p.m.

The scientists expressed disappointment at the latest developments.

Noting that nuclear trends are moving backwards, the Science and Security Board’s Sharon Squassoni pointed out that weapons modernization programs and disarmament have “ground to a halt.”

And action on climate change? “Efforts at reducing global emissions of heat-trapping gases have so far been entirely insufficient to prevent unacceptable climate disruption,” said the Bulletin’s Richard Somerville. “We all need to respond now, while there is still time.”

Opinion: A dramatic doomsday warning to the world