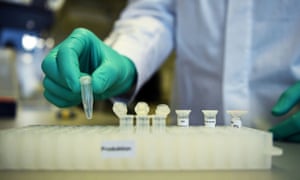 The Trump administration has offered a German medical company “large sums of money” for exclusive access to a Covid-19 vaccine, German media have reported.

The US president had offered the Tübingen-based biopharmaceutical company CureVac “large sums of money” to gain exclusive access to their work, wrote Die Welt.

According to an anonymous source quoted in the newspaper, Trump was doing everything to secure a vaccine against the coronavirus for the US, “but for the US only”.

The German government was reportedly offering its own financial incentives for the vaccine to stay in the country.

The German health minister Jens Spahn said that a takeover of the CureVac company by the Trump administration was “off the table”. CureVac would only develop vaccine “for the whole world”, Spahn said, “not for individual countries”.

Earlier, when approached about the report by the Guardian, the German health ministry would only confirm the accuracy of the quotes attributed to one of its spokespersons in the article.

“The federal government is very interested in vaccines and antiviral agents against the novel coronavirus being developed in Germany and Europe,” the spokesperson quoted in the original article had said. “In this regard the government is in an intensive exchange with the company CureVac.”

The German health ministry spokesperson declined the opportunity to correct any inaccuracies in Die Welt’s account.

On 11 March, CureVac released a statement that its CEO, the US citizen Daniel Menichella, was unexpectedly leaving the firm and would be replaced by the company’s founder, Ingmar Hoerr.

At the start of the month, Menichella was invited to the White House in Washington to discuss strategy for the rapid development and production of a coronavirus vaccine with Trump, the vice-president, Mike Pence, and members of the White House coronavirus task force.

Unfortunately we will start seeing more of this.  Many people cannot cope with the scenario’s we may have to endure and they are afraid of facing them.

We all have to stick together and help one another during this difficult time. Although we should be careful of too much personal interaction that doesn’t mean that we can’t reach out to one another in times of need.

Seven members of a family were fatally shot over the weekend in North Carolina, the Chatham County Sheriff’s Office said Monday.

Pack said the incident is a suspected murder-suicide but authorities are still investigating a possible motive. It occurred in Moncure, about 30 miles southwest of Raleigh.

Those familiar with the area describe it as “a quiet, close-knit community where violence is out of the norm,” the sheriff’s office said. Investigators were searching three homes on a single property in Moncure, N.C. on the morning of March 16, 2020 after the report of a murder-suicide.WRAL

Sheriff’s deputies responded to a “shots fired” call shortly after 5:30 p.m. on Sunday. The seven people were found shot at multiple homes on the same property, Pack said.

“To lose any family member is devastating, but to lose several at once to unexpected violence is unimaginable,” Sheriff Mike Roberson said in a statement. “There are no words to describe the sense of loss we feel as a community in the wake of this terrible event.”

If you or someone you know is in crisis, call the National Suicide Prevention Lifeline at 800-273-8255, text HOME to 741741 or visit SpeakingOfSuicide.com/resources for additional resources.

(NEWSER) – Adolf Hitler apparently relied on a stunning array of drugs while ruling Nazi Germany, including one made popular by the show Breaking Bad: crystal meth.

According to a 47-page U.S. military dossier, a physician filled the Fuhrer with barbiturate tranquilizers, morphine, bulls’ semen, a pill that contained crystal meth, and other drugs, depending on Hitler’s momentary needs, the Daily Mail reports. By this account, Hitler downed crystal meth before a 1943 meeting with Mussolini in which the Fuhrer ranted for two hours, and took nine shots of methamphetamine while living out his last days in his bunker.

The dossier’s allegations will be considered in a British TV documentary this weekend called Hitler’s Hidden Drug Habit, the Times of Israel reports.

Just who was Hitler’s dealer? Named Theodor Morell, he succeeded as a Berlin doctor despite his unconventional methods and controversial past. Revelations that he had treated Jews hurt his business in 1933, and many thought he appeared Jewish; Hitler’s inner circle disliked both his appearance and his practices, according to the Times. A U.S. collector who found the dossier also criticized Morell, calling him “a quack and a fraud and a snake oil salesman.” Yet Hitler trusted him until the Nazis fell in 1945.

Hitler’s alleged use of other drugs, like cocaine and amphetamines, has already been documented — the International Business Times mentions two documentaries that cover it — but his apparent reliance on 74 drugs, including crystal meth, adds to the portrait of a hypochondriac ruling Nazi Germany while high.

(Another recent documentary alleges that Hitler was a billionaire tax dodger.)

This article originally appeared on Newser: Report: Hitler Was on Crystal Meth